The endocrine glands produce chemicals called hormones and pass them directly into the bloodstream. Hormones can be thought of as chemical messages. From the bloodstream, hormones communicate with the body by targeting their target cell to cause a particular change or effect in that cell. The hormone can also create changes in the cells of surrounding tissues (paracrine effect).

The endocrine system works with the nervous system and the immune system to help the body cope with different events and stresses. This branch of medicine, related to the study of the endocrine system, is called endocrinology and is practised by endocrinologists. The field is expanding rapidly due to the understanding of the cellular pathways that stimulate hormones and the discovery of new hormones and their actions.

An exocrine gland, as opposed to an endocrine gland, is a gland that secretes substances (electrolytes, proteins, or enzymes) directly to a target site through ducts or tubes. Some examples include:

The pancreas is both an endocrine and exocrine organ. It releases certain enzymes to aid in digestion that reach the intestine through the pancreatic duct. The endocrine pancreas also releases hormones like insulin and glucagon, which are hormones predominantly related to glucose metabolism, into the bloodstream.

Functions of the endocrine system

Some of the functions of the endocrine system include:

How do hormones work?

A hormone communication will only act on a part of the body if it “fits”. A hormone can be thought of as a key, and its target site (such as an organ) has specially shaped locks in the cell walls. If the hormone fits into the cell wall, it will work. Hormones can trigger a cascade of other signalling pathways in the cell to cause an immediate effect (for example, insulin signalling leads to rapid glucose uptake in muscle cells) or a more delayed effect (glucocorticoids bind to DNA elements in a cell). to activate the production of certain proteins, which take time to produce).

The endocrine system is a tightly regulated system that keeps hormones and their effects at the proper level. One way to accomplish this is through “feedback loops.” Hormone release is regulated by other hormones, proteins, or neural signals. The released hormone then has its effect on other organs. This effect on the organ feeds back the original signal to control any further release of hormones. The pituitary gland is well known for its feedback loops. 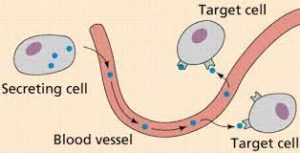 The major glands and organs of the endocrine system include:

Other lesser-known endocrine organs include:

1. Adipose tissue (fat tissue): recognized to be metabolically important. It releases hormones like leptin, which affect appetite, and is also a site of estrogen production. Insulin also acts on adipose tissue.

2. Kidneys: produce erythropoietin (EPO) which stimulates the production of red blood cells, produce renin which is needed to regulate blood pressure, and produce the active form of vitamin D (1-25 dihydroxy vitamin D3)
3. Gut: An increasing number of hormones in the gut are being investigated and are understood to affect metabolism and appetite. These include glucagon-like peptide 1 (GLP-1), appetite-stimulating ghrelin, and somatostatin.